Here are all the questions for the 2017 Bar Labor Law Examination. 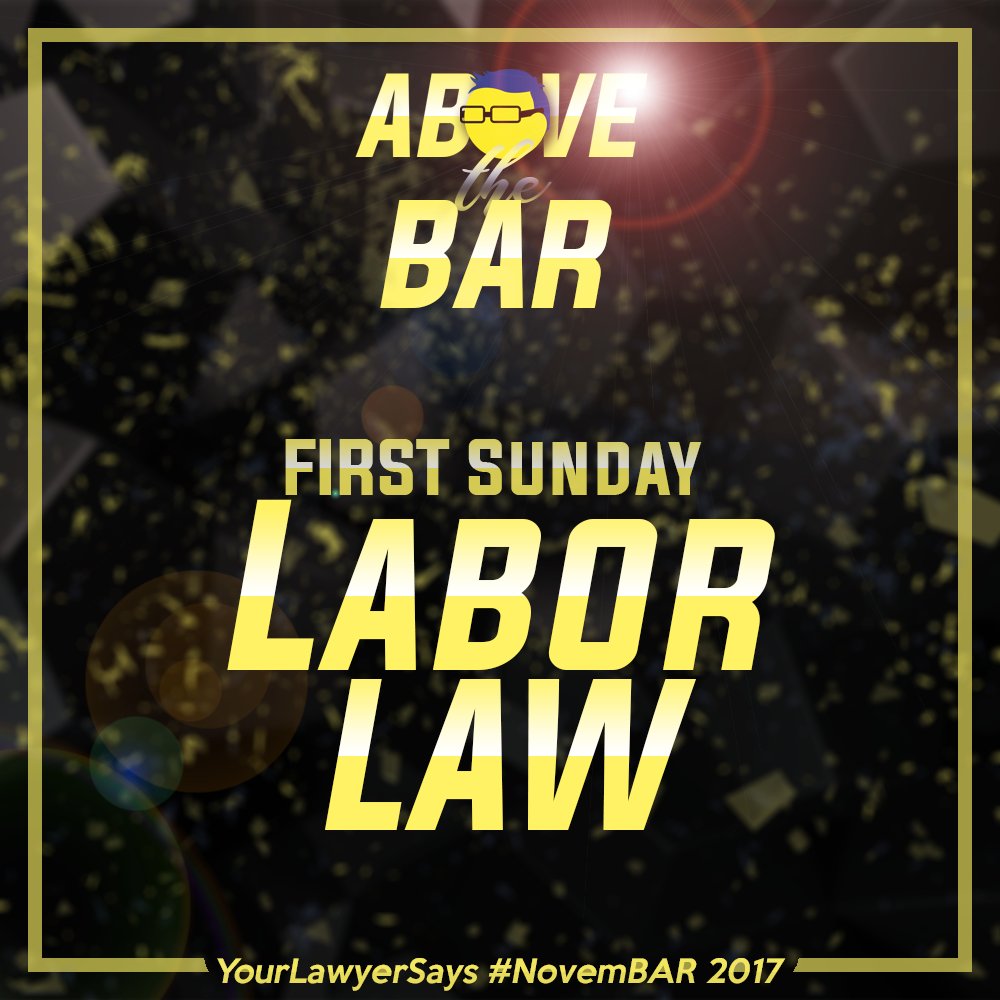 a. What are the accepted tests to determine the existence of an employer-employee relationship? (5%)

b. Applying the tests to determine the existence of employer-employee relationship, is a jeepney driver operating under the boundary system an employee of the jeepney operator or a mere lessee of the jeepney? Explain your answer. (3%)

b. As a rule, direct hiring of migrant workers is not allowed. What are the exceptions? Explain your answer. (2.5%)

c. Phil, a resident alien, sought employment in the Philippines. The employer, noticing that Phil was a foreigner, demanded that he first secures an employment permit from the DOLE. Is the employer correct? Explain your answer. (2.5%)

The Regional Tripartite Wages and Productivity Board (RTWPB) for Region 3 issued a wage order on November 2, 2017, fixing the minimum wages for all industries throughout Region 3.

a. Is the wage order subject to the approval of the National Wages and Productivity Commission before it takes effect? (2%)

b. The law mandates that no petition for wage increase shall be entertained within a period of 12 months from the effectivity of the wage order. Under what circumstances may the Kilusang Walang Takot, a federation of labor organizations that publicly and openly assails the wage order as blatantly unjust, initiate the review of the wage increases under the wage order without waiting for the end of the 12-month period? Explain your answer. (3%)

a. Percival was a mechanic of Pacific Airlines. He enjoyed a meal break of one hour. However, during meal breaks, he was required to be on standby for emergency work. During emergencies, he was made to forego his meals or to hurry up eating. He demanded payment of overtime for work done during his meal periods. Is Percival correct? Explain your answer. (3%)

b. Distinguish a learner from an apprentice. (4%)

c. Are there differences between a househelper and a homeworker? Explain your answer. (4%)

a. One of Pacific Airline’s policies was to hire only single applicants as flight attendants, and considered as automatically resigned the flight attendants at the moment they got married. Is the policy valid? Explain your answer. (2.5%)

b. Tarcisio was employed as operations manager and received a monthly salary of P25,000 through his payroll account with DB Bank. He obtained a loan from Roberto to purchase a car. Tarcisio failed to pay Roberto when the loan fell due. Roberto sued to collect, and moved to garnish Tarcisio’s payroll account. The latter vigorously objected and argued that salaries were exempt from garnishment. Is Tarcisio correct? Explain your answer. (3%)

Marciano was hired as Chief Engineer on board the vessel M/V Australia. His contract of employment was for nine months. After nine months, he was re-hired. He was hired for a third time after another nine months. He now claims entitlement to the benefits of a regular employee based on his having performed tasks usually necessary and desirable to the employer’s business for a continuous period of more than one year. is Marciano’s claim tenable? Explain your answer. (3%)

a. Give the characteristics of each category of employees, and state whether the employees in each category may organize and form unions. Explain your answer. (5%)

b. What are the grounds for validly terminating the services of an employee based on a just cause? (5%)

c. Give the procedure to be observed for validly terminating the services of an employee based on a just cause. (4%)

a. The modes of determining the exclusive bargaining agent of the employees in a business are: (a) voluntary recognition; (b) certification election; and (c) consent election. Explain how they differ from one another. (4%)

b. Marcel was the Vice President for Finance and Administration and a member of the Board of Directors of Mercedes Corporation. He brought a complaint for illegal suspension and illegal dismissal against Mercedes Corporation, which moved to dismiss the complaint on the ground that the complaint pertained to the jurisdiction of the RTC due to the controversy being intracorporate based on his positions in the corporation. Marcel countered that he had only been removed as Vice President for Finance and Administration, not as a member of the Board of Directors. he also argued that his position was not listed as among the corporate offices in Mercedes Corporation’s by-laws. Is the argument of Marcel correct? Explain your answer. (2.5%)

Juanito initiated a case for illegal dismissal against Mandarin Company. The Labor Arbiter decided in his favor, and ordered his immediate reinstatement with full backwages and without loss of seniority and other benefits. Mandarin Company did not like to allow him back in its premises to prevent him from influencing his co-workers to move against the interest of the company; hence, it directed his payroll reinstatement and paid his full backwages and other benefits even as it appealed to the NLRC.

A few months later, the NLRC reversed the ruling of the Labor Arbiter and declared that Juanito’s dismissal was valid. The reversal ultimately became final.

May Mandarin Company recover the backwages and other benefits paid to Juanito pursuant to the decision of the Labor Arbiter in view of the reversal by the NLRC? Rule with reasons. (2.5%)

a. Who may be the legal dependents of Gene under the Social Security Law? (2.5%)

b. Is Gene entitled to the funeral aid for the death of his widowed mother? Explain your answer. (2%)

Rosa was granted vacation leave by her employer to spend three weeks in Africa with her family. Prior to her departure, the General manager of the company requested her to visit the plant of a client of the company in Zimbabwe in order to derive the best manufacturing practices useful to the company. She accepted the request because the errand would be important to the company and Zimbabwe was anyway in her itinerary. It appears that she contracted a serious disease during the trip. Upon her return, she filed a claim for compensation, insisting that she had contracted the disease while serving the interest of her employer.

Under the Labor Code, the sickness or death of an employee, to be compensable, must have resulted from an illness either definitely accepted as an occupational disease by the Employees’ Compensation Commission, or caused by employment subject to proof that the risk of contracting the same is increased by working conditions.

Is the serious disease Rosa contracted during her trip to Africa compensable? Explain your answer. (2.5%)

Given that the liability for an illegal strike is individual, not collective, state when the participating union officers and members may be terminated from employment because of the illegal strike. Explain your answer. (4%)

Are the striking retrenched employees still entitled to separation pay under Sec. 298 of the Labor Code despite the illegality of their strike? Explain your answer. (2%)

a. What conditions may justify the Secretary of Labor to assume jurisdiction? (2.5%)

b. What are the consequences of the assumption of jurisdiction by the Secretary of Labor, and of the disobedience to the return to work? Explain your answer. (2.5%)

Here are all the questions for the 2017 Bar Political Law Examination.

Big thanks to @philipjaramillo on Twitter for the questions!