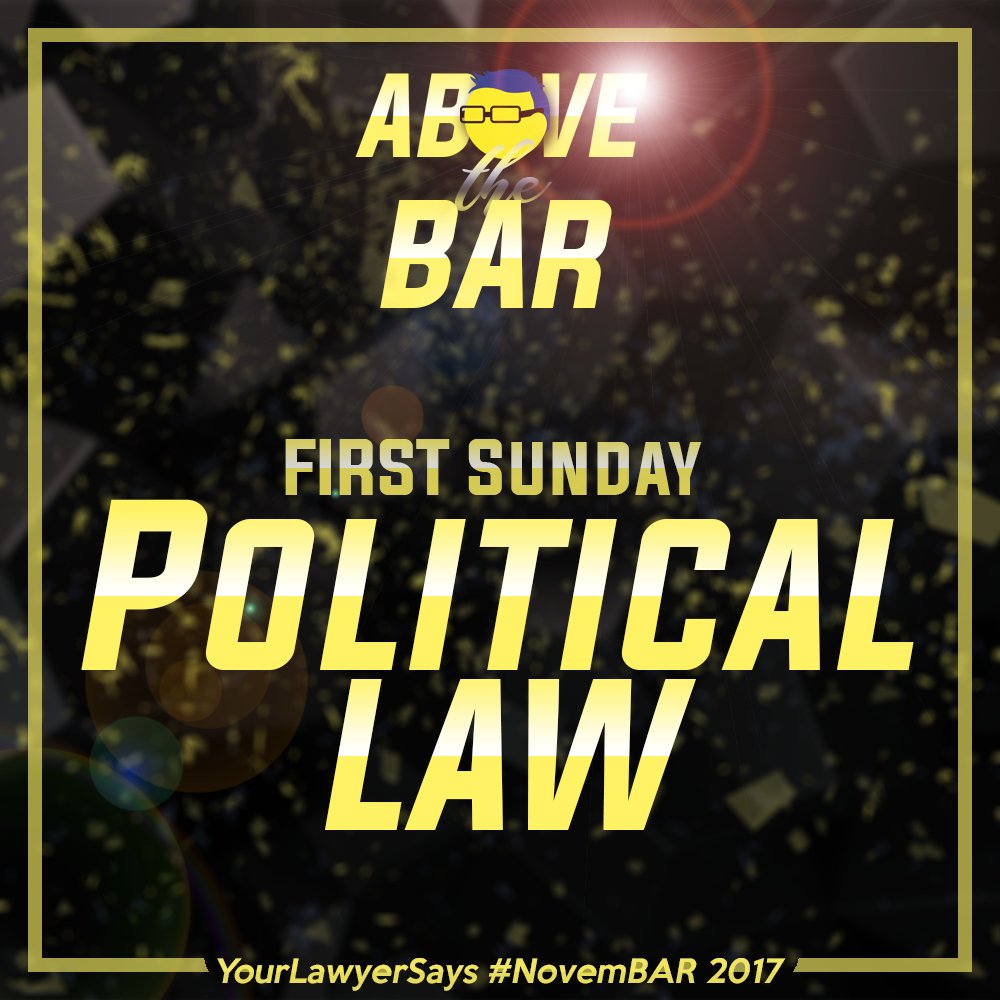 A priority thrust of the Administration is the change  of the form of government from unitary to federal. The change can be effected only through constitutional amendment or revision.

a. What are the methods of amending the Constitution? Explain briefly each method. (3%)

b. Cite at least three provisions of the Constitution that need to be amended or revised to effect the change from unitary to federal, and explain briefly why. (3%)

Under the doctrine of immunity from suit, the State cannot be sued without its consent. How may the consent be given by the State? Explain your answer. (3%)

The doctrine of immunity from suit in favor of the State extends to public officials in the performance of their official duties. May such officials be sued nonetheless to prevent or undo their oppressive or illegal acts, or to compel them to act? Explain your answer. (3%)

Do government-owned or -controlled corporations also enjoy the immunity of the State from suit? Explain your answer. (3%)

State A and State B, two sovereign states, enter into a 10-year mutual defense treaty. State A finds that more progressive State B did not go to the aid of State A when it was threatened by its strong neighbor State C. State B reasoned that it had to be prudent and deliberate in reacting to State C because of their existing trade treaties.

a. May State A unilaterally withdraw from its mutual defense treaty with State B? Explain your answer. (2.5%)

b. What is the difference between the principles of pacta sunt servanda and rebus sic stantibus in international law? (2.5%)

a. What is the pardoning power of the President under Art. VIII, Sec. 19 of the Constitution? Is the exercise of the power absolute? (4%)

b. Distinguish pardon from amnesty. (4%)

a. What is the right of legation, and how is it undertaken between states? Explain your answer. (2%)

b. Under this right, may a country like Malaysia insist that the Philippines establishes a consulate in Sabah to look after the welfare of the Filipino migrants in the area? Explain your answer. (2%)

The  Executive Department has accumulated substantial savings from its appropriations. Needing P3,000,000 for the conduct of a plebiscite for the creation of a new city but has no funds appropriated soon by the Congress for the purpose, the COMELEC requests the President to transfer funds from the savings of the Executive Department in order to avoid a delay in the holding of the plebiscite.

May the President validly exercise his power under the 1987 Constitution to transfer funds from the savings of the Executive Department, and make a cross-border transfer of P3,000,000 to the COMELEC by way of augmentation? Is your answer the same if the transfer is treated as aid to the COMELEC? Explain your answer. (4%)

Give the limitations on the power of the Congress to enact the General Appropriations Act. Explain your answer. (5%)

A bank acquired a large tract of land as the highest bidder in the foreclosure sale of the mortgaged assets of its borrower. It appears that the land has been originally registered under the Torrens system in 1922 pursuant to the provisions of the Philippine Bill of 1902, the organic act of the Philippine Islands as a colony of the USA. Sec. 21 of the Philippine Bill of 1902 provided that “all valuable mineral deposits in public lands in the Philippine Islands, both surveyed and unsurveyed, are hereby declared to be free and open too exploration, occupation, and purchase, and the land in which they are found to occupation and purchase, by citizens of the United States, or of said Islands.” Sec. 27 of the law declared that a holder of the mineral claim so located was entitled to all the minerals that lie within his claim but he could not mine outside the boundary lines of his claim.

The 1935 Constitution expressly prohibited the alienation of natural resources except agricultural lands. Sec. 2, Art. XII of the 1987 Constitution contains a similar prohibition, and proclaims that all lands of public domain, waters, minerals, coal, petroleum, and other mineral oils, all forces of potential energy, fisheries, forests, or timber, wildilfe, flora, and fauna, and other natural resources are owned by the State. This provision enunciates the Regalian Doctrine.

May the Government, on the basis of the Regalian Doctrine enunciated in the constitutional provisions, deny the bank its right as the owner of the mineral resources underneath the surface of its property as recognized under the Philippine Bill of 1902? Explain your answer. (5%)

Ambassador Robert of State Alpha committed a very serious crime while he headed his foreign mission in the Philippines. Is he subject to arrest by Philippine authorities? Explain your answer. (3%)

Extradition is the process pursuant to a treaty between two State parties for the surrender by the requested State to the custody of the requesting State of a fugitive criminal residing in the former. However, extradition depends on the application of two principles – the principle of specialty and the dual criminality principle. Explain these principles. (4%)

The President signs an agreement with his counterpart in another country involving reciprocity in the treatment of each other country’s nationals residing in the other’s territory. However, he does not submit the agreement to the Senate for concurrence.

Sec. 21, Art. VII of the Constitution provides that no treaty or international agreement shall be valid and effective without such concurrence.

Is the agreement signed by the President effective despite the lack of Senate concurrence? Explain your answer. (4%)

a. May the Senate President disregard the enrolled bill doctrine and consider his signature as invalid and of no effect? (2.5%)

b. May the President thereafter withdraw his signature? Explain your answer. (2.5%)

Sec. 26(2), Art. VI of the Constitution provide that no bill passed by either House of Congress shall become a law unless it has passed three readings on separate days and printed copies of it in its final form have been distributed to the Members of the House three days before its passage.

Is there an exception to the provision? Explain your answer. (3%)

Sec. 17, Art. VI of the Constitution establishes an Electoral Tribunal for each of the Houses of Congress, and makes each Electoral Tribunal “the sole judge of all contests relating to the election, returns, and qualifications of their respective Members.” On the other hand, Sec. 2(1).C Art. IX of the Constitution grants to the COMELEC the power to enforce and administer all laws and regulations “relative to the conduct of an election, plebiscite, initiative, referendum, and recall.”

The Congress establishes by law Philippine Funds, Inc., a private corporation, to receive foreign donations coming from abroad during national and local calamities and disasters, and to enable the unhampered and speedy disbursements of the donations through the mere action of its Board of Directors. Thereby, delays in the release of the donated funds occasioned by the stringent rules of procurement would be avoided. Also, the releases would not come under the jurisdiction of the Commission on Audit (COA).

a. Is the law establishing Philippine Funds, Inc., constitutional? Explain your answer. (3%)

b. Can the Congress pass the law that would exempt foreign grants from the jurisdiction of the COA. Explain your answer. (3%)

Command responsibility pertains to the responsibility of commanders for crimes committed by subordinate members of the  armed forces or other persons subject to their control in international wars or domestic conflicts. The doctrine has now found application in civil actions for human rights abuses, and in proceedings seeking the privilege of the writ of amparo.

a. What are the elements to be established in order to hold the superior or commander liable under the doctrine of command responsibility? (4%)

b. May the doctrine of command responsibility apply to the President for the abuses of the armed forces (AFP and PNP) given his unique role as the commander-in-chief of all the armed forces? Explain your answer. (4%)

To fulfill a campaign promise to the poor folk in a far-flung area in Mindanao, the President requested his friend, Pastor Roy, to devote his ministry to them. The President would pay Pastor Roy a monthly stipend of P50,000 from his discretionary fund, and would also erect a modest house of worship in the locality in an area of the latter’s choice.

Does the President thereby violate any provisions of the Constitution? Explain your answer. (3%)

a. According the Sec. 3, Art. VIII of the Constitution, the Judiciary shall enjoy fiscal autonomy. What does the term “fiscal autonomy” signify? Explain your answer. (3%)

b. May a complaint for disbarment against the Ombudsman prosper during her incumbency? Explain your answer. (3%)