Here are the Taxation 2017 Bar Questions. Questions covered almost all taxes – from the important topics of income taxation down to the tiny details of documentary stamp tax. Jurisdiction and constitutionality of tax statutes were likewise asked. 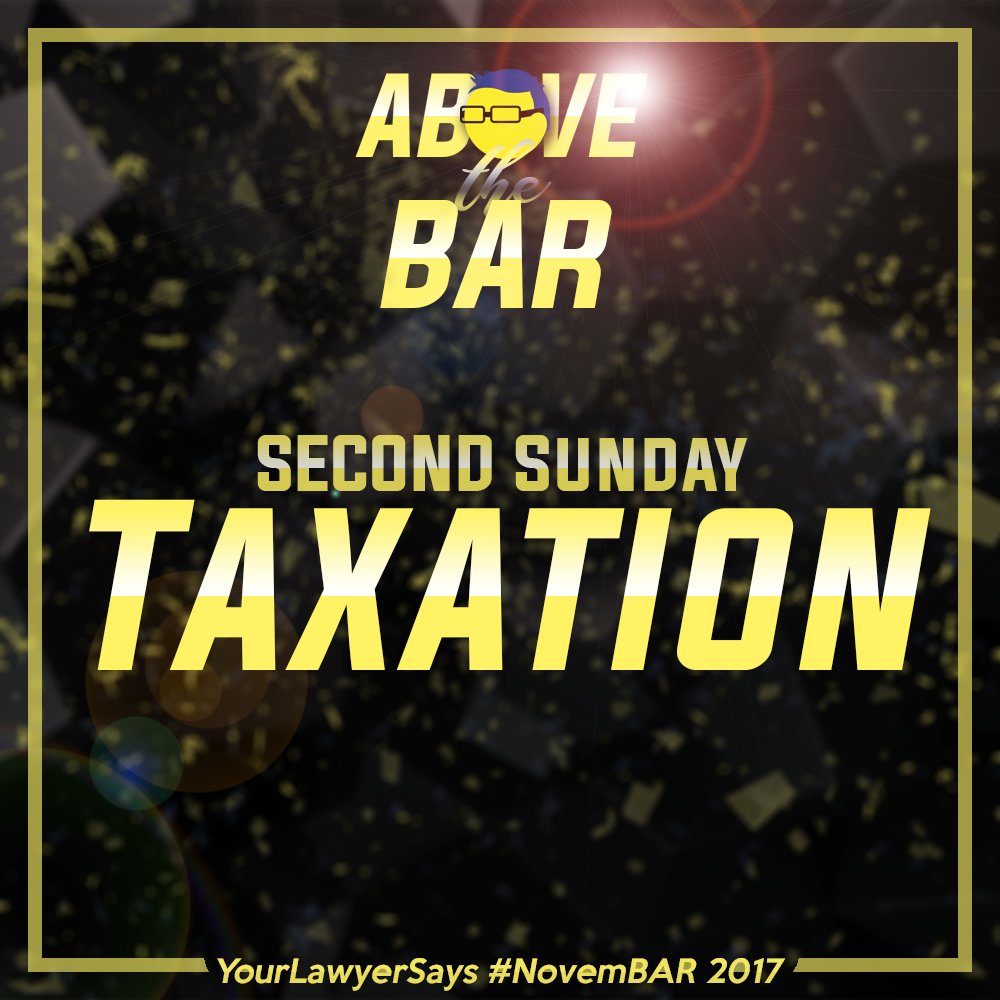 Click here to view all the 2017 Bar Examination questions.

SMZ, Inc., is a VAT-registered enterprise engaged in the general construction business. HP International contracts the services of SMZ, Inc. to construct HP International’s factory building located in the Laguna Techno Park, a special economic zone. HP lnternational is registered with the the Philippine Economic Zone Authority (PEZA) as an ecozone export enterprise, and, as such, enjoys income tax holiday pursuant to the Special Economic Zone Act of 1995.

SMZ, Inc., ﬁles an application with the Bureau of lnternal Revenue (BIR) for the VAT zero-rating of its sale of services to HP International. However, the BIR denies SMZ, lnc.’s application on the ground that HP lnternational already enjoys income tax holiday.

Is the BIR correct in denying SMZ, lnc.’s application? Explain your answer. (6%)

Wreck Corporation is a domestic corporation engaged in the business of importing, reﬁning and selling petroleum products. During the period from September 1, 2014 to December 31, 2014, Wreck Corporation imported 225 million liters of Jet A-1 aviation fuel and paid the excise taxes thereon. Seventy-ﬁve percent (75%) of the total volume of aviation fuel imported were actually sold to international carriers of Philippine and foreign registries for their use or consumption outside of the Philippines in the period from November 1, 2014, to December 31, 2014. Wreck Corporation did not pass on to the international carriers the excise taxes it paid on the importation of petroleum products.

On June 25, 2015, Wreck Corporation ﬁled an administrative claim for refund or issuance of tax credit certiﬁcate amounting to the excise taxes it had paid on the importation of 225 million liters of Jet A-1 aviation fuel.

If you were the Commissioner of lnternal Revenue, will you grant Wreck Corporation’s administrative claim for refund or issuance of tax credit certificate Explain your answer. (6%)

Vanderful, Inc.’s income tax return for taxable year 2015 showed an overpayment due to excess creditable witholding taxes in the amount of P750,000. The company opted to carry over the excess income tax credits as tax credit against its quarterly income tax liabilities for the next succeeding years. For taxable year 2016, the company’s income tax return showed an overpayment due to excess creditable withholding taxes in the amount of P1,100,000, which included the carry-over from year 2015 in the amount of P750,000 because its operations resulted in a net loss hence, there was no application for any tax liability. This time, the company opted and marked the box “To be refunded” in respect of the total amount of P1,100,000.

Vanderful, lnc. now ﬁles in the BIR a claim for refund of unutilized overpayments of P1,100,000. Is the claim meritorious? (4%)

On the basis of a warrant of seizure and detention issued by the Collector of Customs for the purpose of enforcing the Tariff and Customs Code, assorted brands of liquor and cigarettes said to have been illegally imported into the Philippines were seized from a store operating in a Freeport zone. The store owner moved for the quasahal of the warrant on the ground that the collector of Customs had no jurisdiction to enforce it within the Freeport zone.

Should the motion to quash be granted (3%)

On March 30, 2016, XL Co. filed an administrative claim for refund of unutilized input VAT for taxable year 2014, together with supporting documents. XL Co. claimed that its sale of generated power and delivery of electric capacity was VAT zero-rated. Due to the inaction of the Commissioner of Internal Revenue (CIR), XL Co. filed with the Court of Tax Appeals (CTA) the following judicial claims for refund.

Heeding the pronouncement of the President that the worsening traffic condition in the metropolis was a sign of economic progress, the Congress enacted Republic Act No. 10701, also known as An Act Imposing a Transport Tax on the Purchase of Private Vehicles.

Under RA 10701, buyers of private vehicles are required to pay a transport tax equivalent to 5% of the total purchase price per vehicle purchased. RA 10701 provides that the Land Transportation Office (LTO) shall not accept for registration any new vehicles without proof of payment of the 5% transport tax. RA 10701 further provide that existing owners of private vehicles shall be required to pay a tax equivalent to 5% of the current fair market value of every vehicle registered with the LTO. However, RA 10701 exempts owners of public utility vehicles and the Government from the coverage of the 5% transport tax.

A group of private vehicle owners sue on the ground that  the law is unconstitutional for contravening the Equal Protection Clause of the Constitution.

Calvin Dela Pisa was a Permits and Licensing Officer (rank-and-file) of Sta. Portia Realty Corporation (SPRC). He invited the Regional Director of the Housing and Land Use Regulatory Board (HLURB) to lunch at the Sulo Hotel in Quezon City to discuss the approval of SPRC’s application for a development permit in connection with its subdivision development project in Pasig City. At breakfast the following day, Calvin met a prospective client interested to enter into a joint venture with SPRC for the construction of a residential condominium unit in Cainta, Rizal.

Calvin incurred expenses for the lunch and breakfast meetings he had with the Regional Director of HLURB and the prospective client, respectively. The expenses were duly supported by official receipts issued in his name. At month’s end, he requested the reimbursement of his expenses, and SPRC granted his request.

a. Can SPRC claim an allowable deduction for the expenses incurred by Calvin? Explain your answer. (2.5%)

b. Is the reimbursement received by Calvin from SPRC subject to tax? Explain your answer. (2.5%)

On April 30, 2015, Daryl resigned as the production manager of 52nd Avenue, a television studio owned by SSS Entertainment Corporation. 52nd Avenue issued to her a Certificate of Withholding Tax on Compensation (BIR Form No. 2316), which showed that the tax withheld from her compensation was equal to her income tax due for the period from January 2015 to April 30 2015.

A month after her resignation, Daryl put up her own studio and started producing short films. She was able to earn a meager income from her short films but did not keep record of her production expenses.

Is Daryl qualified for substituted filing for taxable year 2015? Explain your answer. (3%)

Upon his retirement, Alfredo transferred his savings derived from his salary as a marketing assistant to a time deposit with AAB Bank. The bank regularly deducted 20% final withholding tax on the interest income from the time deposit.

Alfredo contends that the 20% final tax on the interest income constituted double taxation because his salary had been already subjected to withholding tax.

On January 27, 2017, Ramon, the comptroller of Vantage Point, Inc., executed a document entitled “Waiver of the Statute of Limitations” in connection with the BIR’s investigation of the tax liabilities of the company for the year 2012. However, the Board of Directors of Vantage Point, Inc., did not adopt a board resolution authorizing Ramon to execute the waiver.

Accordingly, Vantage Point, Inc., filed a petition for review in the CTA to seek the cancellation and withdrawal of the assessment on the ground of prescription.

a. What constitutes a valid waiver of the statute of limitations for the assessment and collection of taxes? Explain your answer. (3%)

b. Has the right of the Government to assess and collect deficiency taxes from Vantage Point, Inc. for the year 2012 prescribed? Explain your answer. (3%)

The Board of Directors of Sumo Corporation, a company primarily engaged in the business of marketing and distributing pest control products, approved the partial cessation of its commercial operations, resulting in the separation of 32 regular employees. Only half of the affected employees were notified of the board resolution.

Rule on the taxability of the separation pay and indemnity that will be received by the affected employees as the result of their separation from service. Explain your answer. (3%)

On September 17, 2015, Data Realty, Inc., a real-estate corporation duly organized and existing under Philippine law, sold to Jenny Vera a condominium unit at Freedom Residences in Malabon City with an area of 32.31 square meters for a contract price of P4,213,000. The condominium unit had a zonal value amounting to P2,877,000 and fair market value amounting to P550,000.

a. Is the transaction subject to value-added tax and documentary stamp tax? Explain your answer. (3%)

b. Would your answer be the same if the property was sod by a bank in a foreclosure sale? Explain your answer. (3%)

a. May the collection of taxes be suspended? Explain your answer. (3%)

b. Is the CTA Division justified in requiring Globesmart Services, Inc., to post a surety bond as a condition for the suspension of the deficiency tax collection? Explain your answer. (3%)

Casimira died on June 19, 2017, after three weeks of confinement due to an unsuccessful liver transplant. For her confinement, she had incurred substantial medical expenses that she financed through personal loans secured by mortgages on her real properties. Her heirs are still in the process of making an inventory of her assets that can be used to pay the estate taxes, if any, which are due on December 19, 2017.

a. Are the medical expenses, personal loans and mortgages incurred by Casimira deductible from her gross estate? Explain your answer. (5%)

b. May the heirs of Casimira file the estate tax return and pay the corresponding estate tax beyond December 19, 2017, without incurring interest and surcharge? Explain your answer. (3%)

The BIR assessed the Babuyan Water District (BWD) with deficiency income taxes amounting to P8.5 million, inclusive of interest and surcharge. The BWD disputed the assessment, and argued that it was a wholly-owned government entity performing essential government functions. However, the BIR denied the protest.

The BWD filed a petition for arbitration in the Office of the Secretary of Justice pursuant to Sections 66 to 71, Chapter 14, Book IV of the Administrative Code of 1987 to assail the denial of its protest, and to seek the proper interpretation of Section 32(B)(7)(b) of the Tax Code that excluded from gross income the income derived by the Government or its political subdivisions. The Secretary of Justice rendered a decision declaring the BWD exempt from the payment of income tax.

The Commissioner of Internal Revenue appealed to the CTA on the sole ground that the Secretary of Justice had no jurisdiction to review the assessment of the BIR.

Is the appeal meritorious? Explain your answer. (4%)

San Juan University is a non-stock, non-profit educational institution. It owns a piece of land in Caloocan City on which its three 2-storey school buildings stood. Two of the buildings are devoted to classrooms, laboratories, a canteen, a bookstore, and administrative offices. The third building is reserved as dormitory for student athletes who are granted scholarships for a given academic year.

In 2017, San Juan University earned income from tuition fees and from leasing a portion of its premises to various concessionaires of food, books, and school supplies.

a. Can the City Treasurer of Caloocan City collect real property taxes on the land and building of San Juan University? Explain your answer. (5%)

b. Is the income earned by San Juan University for the year 2017 subject to income tax? Explain your answer. (5%)

b. Distinguish compromise from abatement of taxes. (3%)

b. If SLC University later sells the three parcels of idle land to Puregold Supermarket, Inc., a stock corporation, will SLC University be liable for capital gains tax? Explain your answer. (3%)

c. If SLC University donates the three parcels of idle land in favor of the Municipality of Cuyapo, Nueva Ecija, will SLC University be liable for donor’s tax? Explain your answer. (2.5%)

Here are the questions for the second Sunday morning’s Civil Law 2017 Bar Examination.

Big thanks to @chriszabeatch for the questions!